“Show me your witches, and I’ll show you your feelings about women.”

-Pam Grossman, on society’s use of the term “witch”.

Being a feminist with a support system has its perks. For example, all my friends enthusiastically affirm my decision not to have children and I never face a moral qualm over choosing to prioritize my education and career, which makes my life easier. But being a feminist is also not without repercussions. It would be an absolute mistake to state that choosing to be a feminist is an easy decision in an age when women are doubted and humiliated simply for stating that they have been sexually harassed, violated, and abused.

When I first became a “feminist” in my teenage years, I cooly told people that I passionately supported women’s equality, but I insisted that I absolutely wasn’t a feminist. Of course, I was a feminist, I just didn’t call myself one. What I had missed in my young, naive years was that the word “feminist,” along with many other terms, has been co-opted by a patriarchal society to be weaponized against womxn like myself. On some level, I knew that a feminist was a persona non grata to polite society, and I refused to be lumped into that category. I thought I wasn’t a feminist because I was told by society that to be a feminist was shameful and “anti-man”.

In the years since I have fully embraced my identity as a feminist, I have opened my arms even further to other derogatory terms that are used against women to disarm and belittle. While there has been significant work among some women to reclaim the term “slut,” the word I have been most drawn to is “witch.” Unlike other terms, “witch” is a particularly divisive term that is deeply rooted in human history and has been used to destroy women socially, emotionally, and physically.

A “witch” is a woman who does not fit the idealized, traditional concept of a woman as a mother, empath, caretaker, and reverent or quiet individual. Working women, or women who have chosen an independent path that is not bound to domesticity and child-rearing, are assumed by some to be unfeeling, malicious, or cold. Of course, implied in that view is that the positions in society that require the most intellectually intensive work, or require strength–physical or mental–are seen as the work of men, specifically in politics. To be a politician requires long hours away from family and home life, it also requires a loud voice that is expressive and charismatic; all characteristics that are “unbecoming” of a gracious woman.

When criticizing female candidates and politicians, society tends to attack their supposed lack of femininity, humility, and faithfulness to traditional female values. Maybe they are “shrill” like Hillary Clinton, or “too well dressed” like Alexandria Ocasio-Cortez, or god-forbid, had more than one past, noteworthy relationship like Kamala Harris. All of these women did nothing immoral or illegal, they are simply multifaceted beings. To take up space as a woman with a unique identity and sense of self is to embody the “witch”; it is to reject the norms that subject women to the confines of a single, homogenized idea of what womanhood is.

I don’t believe it is any coincidence whatsoever that we have numerous derogatory terms in the English language reserved specifically for women. While Donald Trump and Brett Kavanaugh can both escape relatively unscathed from numerous verified claims of sexual misconduct, the terms “slut” and “witch” have never been used against either of them. These terms are exclusively reserved for women who are held to an extremely rigid standard that is nearly impossible to meet.

Rather than attempting to abide by this ridiculous standard, I choose to instead reclaim the identity of the witch, to take the power of the term back so that it can no longer be used against me. It is okay to be expressive, innovative, non-gender normative, and to simply take up space. I refuse to water down my passion for the sake of being likable. Too often women have been told they simply aren’t likable for being unique, and I truly believe that is because fully embracing our strength is threatening to societal traditions. I am ready to be a threat to the systems that have oppressed us, though, and am proud to see women running for office who are realizing their power and voice in a landscape that tells us to remain submissive.

April Wilson is the development director for Alliance for a Better Utah. 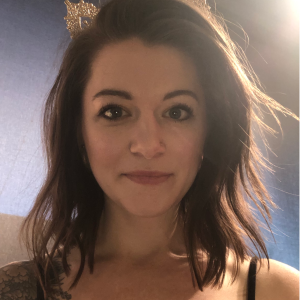