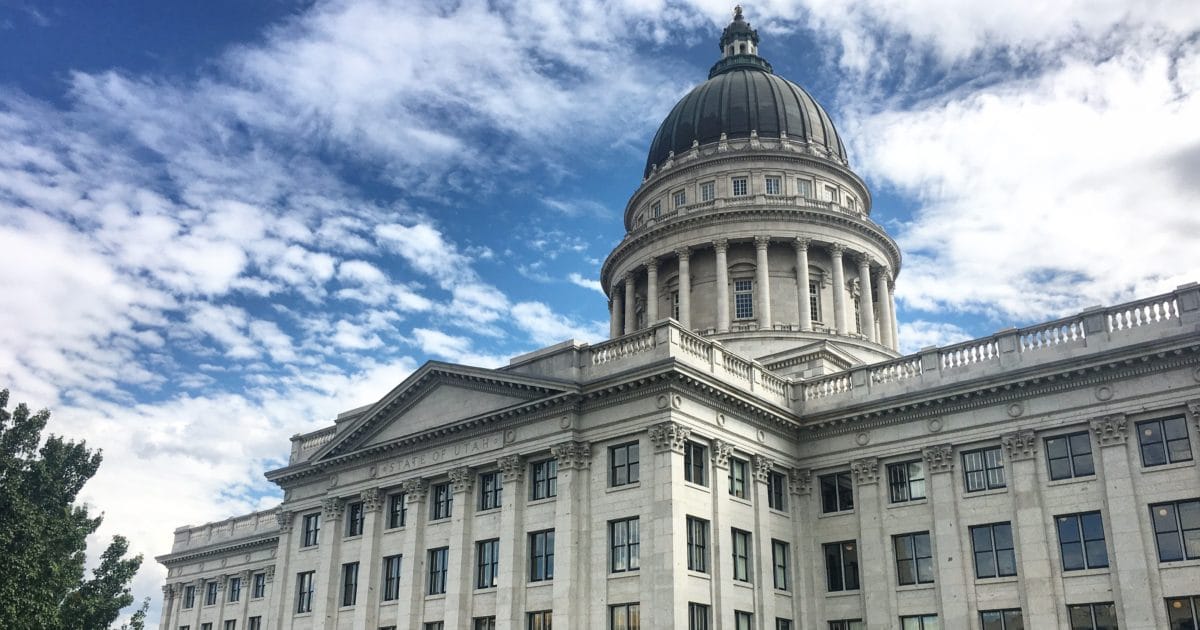 In a press conference held on the steps of the State Capitol Building, a handful of plaintiffs and their attorneys announced the lawsuit against the state. They expressed their conviction that the law, Senate Bill 78, is unconstitutional and their hopes that a favorable outcome would keep partisan politics from further encroaching into the governance of Utah schools.

“Few things are more vital and should be less partisan than the education of our children,” said Josh Kanter, board chair of the ABU Education Fund, a plaintiff in the litigation. “We should be doing all that we can to depoliticize anything relating to the success of our education system, not adding to that politicization. Making school board elections partisan will deter some of our most qualified school board candidates and is exactly the wrong thing to be doing in the state and in this political climate.”

The lawsuit asks the court to declare that SB78 is unconstitutional for two reasons. The first argument is that Article X of the Utah Constitution forbids considering partisan affiliation for employment in Utah’s schools. Because members of the State Board of Education are paid salaries and receive employee benefits, the complaint alleges those members are employees of Utah’s school system even if elected to that position.

Denis Morrill, a former member of the Utah State Board of Education and chair of Utahns for Public Schools, a plaintiff in the litigation, said: “I spent 10 years on the State School Board and 5 years on the Granite Board. I can’t imagine being bound by party platforms as you try to focus on what is best for kids. The rancorous rhetoric of today’s party politics would completely divert the attention of the School Board from kids to politics. There is no room for partisan politics in these races — the focus must be on kids.”

In the event that school board candidates must run in a partisan election, the complaint also takes aim at the election process itself. Relying on the principle of “one person, one vote” within the Utah Constitution, the lawsuit alleges the caucus/convention system used by political parties to nominate candidates for office gives unequal weight to similarly-situated voters. This inequality stems from the different populations across precincts and the practice of giving delegate voting power to party leaders and elected officials.

Because of these procedures, some precincts would have a greater voice than others when it comes to nominating the candidate who would go onto a state school board general election. In a one-party state, this means those precincts would have a greater say than others in picking who ends up winning. Hence, the lawsuit’s claim that this system violates “one person, one vote.”

The lawsuit also focuses on two other aspects of the caucus/convention system: that giving county commissioners and clerks the power to apportion precincts is an unconstitutional delegation of power, and that holding secret ballots in convention unconstitutionally takes away the power of voters to hold their representatives accountable.

“This is a time for unity of political philosophies in the best interest of Utah school children,” said Carol Lear, a current member of the Utah State Board of Education. “Both nationally and in Utah, partisan politics are counter productive in determining what is essential for a solid curriculum, excellent instruction, equity for all students, and genuine respect for all public education system participants.”

Plaintiffs in the lawsuit include advocacy groups such as the Utah Parent Teacher Association, Utahns for Public Schools, and the ABU Education Fund, along with several individuals who plan to run for the Utah State Board of Education in the future. These individuals include a current member of the State Board of Education and several who have experience teaching. One of the plaintiffs, an unaffiliated voter, is challenging the law because he would be precluded from running under the Hatch Act due to his employment with the federal government.

The plaintiffs are being represented by David Irvine and Alan Smith. Irvine and Smith have been involved in a number of public interest cases, and most recently represented the citizen plaintiff in the federal case that held the previous governor’s committee selection process for nominating State Board of Education candidates to be unconstitutional.