It was 21 years ago, in 1996, when former-President Bill Clinton declared Grand Staircase-Escalante a National Monument (GSENM), an act many called a “midnight monument” designation. It was argued this action came unexpectedly, leaving Utah’s congressional delegation in the dark, as well as locals in the area. 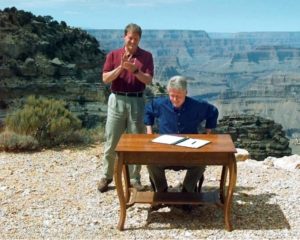 Now, 21 years later, Utah legislators are still bitter. During the 2017 legislative session, Rep. Mike Noel introduced HCR 12, a resolution calling for the reduction of existing monument boundaries. Although the Bureau of Land Management manages GSENM, and although grazing rights and extraction permits existing previous to the designation were allowed to continue, the coal reserves beneath the Kaiparowits Plateauhave been inaccessible since the designation. Due to this, leaders ranging from Sen. Orrin Hatch to local county commissioners have voiced their displeasure. Among their rhetoric, they have claimed to see a decline in the economy and the population – families being forced to move due to lack of work.

There are elements of truth in their words. The boundaries of the monument designation prevented the development of two proposed coal mines which mine-proponents argue would have provided numerous jobs to those in the area. However, their argument neglects to account for the unreliable and unsustainable “boom and bust” nature of the coal industry – not to mention the potentially devastating effects upon pristine Kaiparowits wilderness. 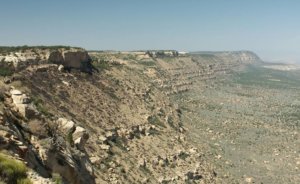 They also fail to acknowledge the benefits the monument designation brought about. There has been a growth in the tourism industry, resulting in a shift in the economic base of the areas around Grand Staircase with the emergence of outfitting companies, lodging and retail facilities, and restaurants catering to those visiting for the outdoor recreation. This narrative runs counter to the idea of a failing economy, and the numbers similarly suggest otherwise. A Headwaters report shows a 38% increase in jobs, a 40% growth in personal income, and a 30% growth in per capita income  jobs between 1996 and 2008. Looking at Utah as a whole, the state’s economy receives more than $5 billion annually from recreation (according to the Outdoor Industry Foundation). As for a declining population, the numbers would again prove otherwise. The same Headwaters report shows an 8% population growth between 1996 and 2008.

n April 2017, President Trump signed an Executive Ordercalling on Secretary Ryan Zinke to examine monuments designated within the last 21 years. Of course this encompasses two of Utah’s most controversial monuments: Bears Ears, designated at the end of 2016, and Grand Staircase, conveniently included in the 21-year timespan determined in the Executive Order.

With our monuments at risk, it is important to know the facts. Utah’s congressional delegation and even its county commissioners fail to fully represent their constituents. We’re here to keep you in the loop and let you know the facts and how you can get engaged. Stay tuned as we update this tab with further information!

Learn more about the economic impact of GSENM.
Learn More

Learn more about the scientific impact GSENM has on the region and the ecosystem.
Learn More

Learn more about specific facts regarding the monument, as well as gain insight from the various newspaper articles reporting on the matter.
Learn More

In the midst of Utah’s public lands madness, much of our leaders’ rhetoric claims public lands are good for the soul, but not for the economy. Better Utah’s super volunteer, Doris Schmidt, did some extensive research and wrote up a report challenging this narrative and demonstrating just how good public lands are for our economy.