This is Part I of a four-part series looking at the good, the bad, and the ugly of the 2022 General Session of the Utah State Legislature. This is by no means a comprehensive guide to the session, but rather a quick glance at the highlights (and lowlights) of what happened this year on Capitol Hill in four categories: Equal Rights, Strong Communities, Good Government, and Sustainable Future.

Utah has been, and continues to be, a very homogenous state. However, our demographics are changing and we are becoming a more diverse state. At Better Utah, we believe that Utahns of all races, abilities, genders, religions, and sexual orientations should have access to the same opportunities and must never have their freedom to live authentically taken away from them.

Utah politicians pride themselves on following the so-called “Utah Way,” an oft-used phrase that includes compromise and working together to come to the best solution. But do lawmakers actually follow “the Utah Way” as they’re rapidly considering legislation over the course of the busy 45-day legislative session? Or does it often get disregarded as political considerations and party loyalty get in the way?

The 2022 Legislative Session will undoubtedly be remembered for its final few hours. H.B. 11 was one of the first bills introduced this legislative session and lawmakers had been meeting with transgender advocates for weeks to negotiate a compromise over regulating the participation of transgender students in school sports activities. However, the version creating a commission to set baseline physical standards and determine eligibility was still problematic and Governor Cox threatened to veto the bill.

After lobbying from the Utah Eagle Forum and the end of the candidate filing deadline, Sen. Dan McCay replaced the “commission” version of the bill with a new substitute banning transgender girls from participating in any sports competitions, which was passed by the Senate and House with only hours left in the session. If the ban is challenged in court and struck down, the law would revert back to the commission originally outlined in prior versions of the bill.

This outright ban on transgender participation in school sports is part of a nationwide coordinated attack on transgender rights aimed at children. 11 other states have passed school sports bans, starting with Idaho in 2020, a law which was blocked by a federal judge on constitutional grounds later that year. In 2022 alone, over 280 anti-trans bills have been introduced in state legislatures. Now, more than ever, we need legislation passed at the federal level, such as the Equality Act, protecting the rights of LGBTQ+ individuals.

Thankfully, Governor Spencer Cox immediately promised that he would still veto the new version as soon as it reached his desk, which he did on March 22. Rather than issuing a short veto statement, Governor Cox wrote a four page letter explaining his issues with both the process and policy of the bill, which you can read here.

Just as he was announcing his intention to follow through with his veto, GOP leaders announced they would come back into session to attempt to override the veto, which took place today, Friday, March 25. Although lawmakers fell short of the total needed for an eventual veto override on the original vote, multiple GOP lawmakers switched their votes and ended up voting to override the Governor’s veto. Lawmakers also passed legislation indemnifying schools and the high school sports association, acknowledging that litigation challenging the newly enacted law is imminent.

While the outcome of H.B. 11 is unclear at the time of writing this post, we can celebrate the death of a worse bill. Even though it made it out of the Rules Committee, the House Health and Human Services Committee never held a hearing on Rep. Rex Shipp’s bill banning gender-affirming care for minors (H.B. 127). This was never adopted because of the lack of a hearing, but Shipp released a substitute version that would have completely banned “cosmetic breast surgical procedures” for all minors, not just transgender youth.

One of the most talked about bills heading into the session was an effort spearheaded by The Period Project to provide period products in all female and unisex restrooms in Utah’s public schools. H.B. 162, sponsored by Rep. Karianne Lisonbee and co-sponsored by 37 other representatives, passed unanimously in both the House and Senate. Free access to these products in schools helps combat “period poverty,” inequities that children from low-income families face in accessing products for an involuntary physical occurrence shared by all menstruating women, and the broader impacts of missed classes, health risks, shame, embarrassment, and lower confidence.

Less known was a bill seeking to address inequities in our state’s prisons. H.B. 194, sponsored by Rep. Melissa Ballard, requires the Department of Corrections to provide women in prison with educational and vocational opportunities that are “substantially equivalent” to the opportunities provided to men. These discrepancies were discussed during the interim session last year and the unanimous support from lawmakers indicate they want the issue addressed before the state opens a new prison later this year.

It was great to see the unanimous support for these bills but it was unfortunate to once again see the lack of support for a different bill that would do so much more. Sen. Kathleen Riebe introduced a resolution, S.J.R. 7, that would have Utah join the growing list of states to ratify the Equal Rights Amendment to the Constitution of the United States. However, Senate GOP leadership decided not to give this effort a public debate, and the resolution died in the Senate Rules Committee.

In December 2020, political, business, and community leaders came together to sign the “Utah Compact on Racial Equity, Diversity, and Inclusion.” Responding to the recent protests following the murder of George Floyd, the compact serves as a set of core guiding principles toward building a more inclusive society and overcoming systemic inequities.

Obviously, a mere signature on a page to signal agreement with broad principles doesn’t affect change on its own—actions speak louder than words. As a state, we have much more to do as we work toward a more equitable future for all, especially when it comes to deep-rooted systemic inequities in our societal, economic, and government institutions. But it seems, to me at least, that the tenor of conversations have shifted up on Capitol Hill since the compact was signed and there have been small steps toward embracing a more diverse future that includes people of different backgrounds. Here are a few good policies that passed this year:

Despite all the positive progress lawmakers have made to adopt policies that work to be more inclusive of a more diverse population, there is still more work to do. Case in point: for the second year in a row, lawmakers rejected a bill that would prohibit discrimination based on hairstyles and textures historically associated with race. Better known as the CROWN Act, S.B. 117, sponsored by Sen. Derek Kitchen, was held (aka “defeated”) in the Senate Business and Labor Committee by a vote of 3–1, though the hearing was definitely not as controversial as last year’s, which was highlighted in an episode of Last Week Tonight with John Oliver.

Surprisingly, we did not see any new restrictions placed on abortion access this year. While Rep. Kera Birkeland did introduce H.B. 382, a bill similar to one that former Rep. Steve Christiansen ran last year that would make increase the amount of propaganda women are forced to watch before having an abortion, it never was released from the House Rules Committee.

Why were we fortunate enough to go one year without another attack on a woman’s right to choose? I’m guessing that GOP leaders feel they already have enough election-year material with the United States Supreme Court expected to issue a controversial decision on abortion rights this June. If that decision overturns Roe v. Wade, it would trigger a law on the books completely banning abortion in Utah, despite the fact that 80% of Utahns don’t support placing additional restrictions on abortion access.

Keep an eye out for the 2022 edition of our annual Progress Report! Each year, we take all the votes on dozens of bills in four categories–strong communities, equal rights, good government, and sustainable future–and give each lawmaker grades in each category and for their overall commitment to progressive values. The Progress Report is not only useful to better understand how your representative and senator voted during the legislative session, but is a great tool to help inform your vote during election time!

This year’s Progress Report will be released in May at progressreport.betterutah.org. 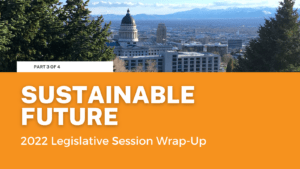 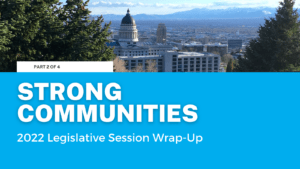